Optimize and Save 10-20% of your Bing Ads budget

2015 was a wonderful year for Karooya and its customers. Karooya's customers saved over $3 million in annual ad spend by using Karooya's negative keywords tool.

We are starting 2016 with an important product update. Karooya now offers Negative Keywords Tool for Bing. Now that you have read the TL;DR version, here is more information on this announcement. (Did we had you at "Bing Ads?" In that case, sign up for a free trial right away!)

According to comScore, As of December 2015, Bing had a little more than 20% market share. If you consider Bing, AOL and part of Yahoo, together, Bing Ads will be served at volume that just can't be ignored. 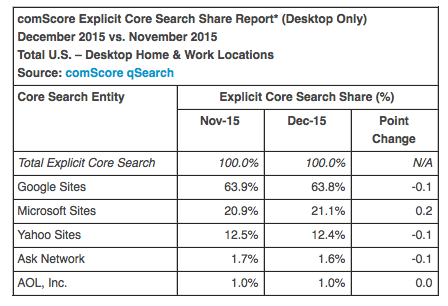 Even PPC experts agree that Bing needs to be taken seriously. Google is a very visible and hyper-competitive channel. While it continues to be one of the best, if not the best, channels to drive paid traffic, the competition can be overwhelming. It's hard to compete with small budget. Plus, there is always saturation. Even though Google is quite big, the search inventory is finite. The keywords that profitably work for you is small. In such case, having another alternative channel like Bing Ads means cost-effective incremental traffic.

Of course, apart from all these macro developments, we also received some micro-feedback about support for Bing. This was a clear indication that many search advertisers in USA are seriously considering or already advertising on Bing. Some customers are getting as much as 25% conversions from Bing as that of Google. Even though, the published market share numbers for Bing are on the lower side, due to less competition, advertisers can get more conversions from Bing.

In 2015, Bing also announced bunch of improvements to their Broad Match type which promised more relevant traffic. You can check out a detailed presentation from Bing team here.

According to the numbers published, 44% potential clicks are lost to competition if broad match is not used.

Using Broad Match can bring more traffic which was previously untapped. But, it also exposes advertisers' account to, from a client's perspective, potentially irrelevant and/or poor converting traffic. Broad Match is like driving a very nice car without any brakes.

This is where Karooya helps advertisers.

Our negative keywords tool has been battle-tested with hundreds of Google AdWords accounts. We bring the same goodness to Bing Ads.

With Karooya, advertisers will be able to

There are more goodies available for optimizing your Bing account. We are also baking some nice things to make your life just a little easier when you manage multiple search platforms. I would be glad to provide you a demo, personally.

We are super-excited to bring this to you. We hope, our solution will help you achieve super-normal results with Bing Ads.

Go ahead, sign up for a free trial! I look forward to giving you a demo.