Here’s Google’s QoQ timeline chart that shows how the paid click and CPC has evolved over the select eight quarters (Q3, 2014 to Q2, 2016) plotted against the major announcements made during the period. 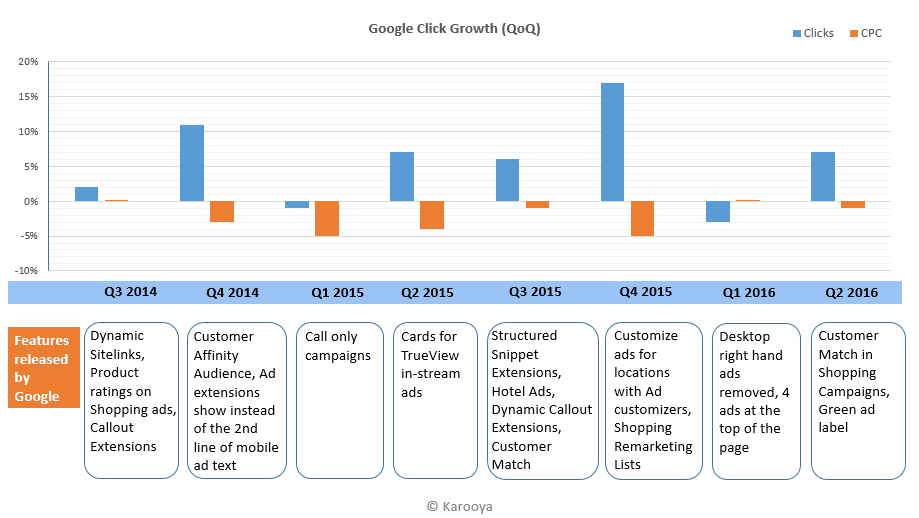 Of the developments made, one of the significant ones was the change in the ad label color from yellow to green. How this change will impact the ad CTR, the coming quarters will make clear. Also, Google extended its customer match feature to shopping campaigns, that lets customers target an uploaded e-mail list.

Google changed the ad placement on SERP, by removing the right column ads from the desktop completely and replacing it with 4 ads at the top of the page. The reason suspected was to standardize the advertising format across devices, as mobile did not support right hand ads.

Ad customizers was enhanced to customizing text ads based on the location a user is searching from, making the ad more relevant and precise. The remarketing list were extended to shopping campaigns too, helping customers alter their bid for high-valued customers and reconnect with them to generate ROI.

The dynamic structured snippets was improvised new ad extension was added with the launch of Structured Snippets that would let advertisers customize structured information displayed along with their text ad. The dynamic version of callout extensions was launched, the hotel ads were improved to make easier bookings, customer match was introduced for Google Search, Gmail, YouTube to help advertisers connect with their high-valued customers.

Reaching potential customers was simplified by encouraging customers to call the business directly. The feature introduced to induce this action from customers was call-only campaigns.

From October, the mobile search ads would start showing ad extension instead of the second line of description. During this time period Google also introduced the affinity and in-market audience to support advertisers in reaching potential audience across the Display Network.

This period saw the launch of dynamic sitelink extensions which are automatically generated and displayed below the ad text. Product ratings and review for shopping ads were also introduced to help users make a purchase decision. Google introduced callout extensions to help advertisers show additional text that highlight the products and services offered.

Cut down wasted ad spend in your AdWords account easily with negative keyword recommendations. Save 10-20% of your budget in minutes!

Are you a Business owner, CEO, CMO, or Director of Marketing?

We can help you improve efficiency and grow conversions from your paid search efforts with Google and Bing. Know more about PPC Management Service and schedule a call.