Merkle released the Q4 2016 Digital Marketing Report, covering some of the major findings in Paid Search, Organic, Social Media. We have picked some of the key highlights of the report in this post.

To view the entire findings and analysis, you can download the report from here.

Q4 saw significant rise in Google Shopping traffic generated by Google Search Partners. Much of the growth, from 6% in Q4, 2015 to 10% in Q4, 2016, is attributed to rolling out PLAs to image search and YouTube. 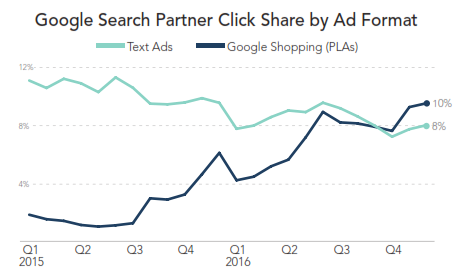 Overall the click volume of PLA increased by 43% inclusive of traffic led by google and its partners, whereas the text ads fell behind as partner clicks dropped by 13% YoY. The spending on PLAs stayed at 30% in comparison to the 12% rise of text ads spending from 9% in Q3, 2016.

The introduction of four ads at top of page results, made the mobile ad inventory grow, as a result of which there was significant click volume throughout the year. The new ad positions were observed to have driven close to 5% Phone text ad clicks in the fourth quarter. 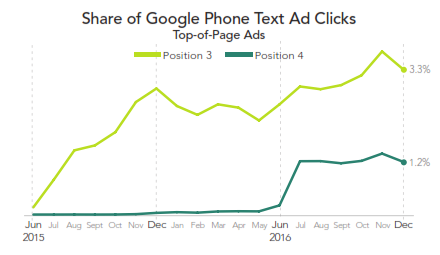 The overall traffic share of phones was 47% in Q4, 2016 in comparison to 33% the last year same quarter. Comparatively, tablets contributed with 9% of clicks, as a result of advertisers shifting their bidding to a more converting ‘Desktop’. This change was as a result of device bidding announcement made by Google last year.

No wonder, advertisers are vouching for mobile as the next big thing, as positioned by Google during the Performance Summit in 2016.

Since its official launch in April, Expanded Text Ads have had an average impact on performance. Despite Google initially announcing expecting a 20% hike in the CTR, the CTR was observed to be 1-3% lower than standard text ads for the same location in Q4 2016. It is assumed that this new ad format might not have a significant impact even after it takes over the Standard Ads.

So, it appears this year will be filled with strategies to make the ETAs outperform Standard Ads. With the due date of bidding goodbye to standards ads nearing, it is time to let ETAs takeover and for advertisers to drive all focus in making the most out of this format.