From our experience, the impression share for ETAs went up slowly, over the weeks. Even now, the total impressions are less than half of all the impressions an account gets. If you have started building ETAs for your accounts immediately after Google’s account, right now, they are probably in a stable state. That is, ETAs are getting their allotted share of impressions. If you have set your ad rotation to optimize for conversions, Google has probably found a winning ETA.

Last week, Google extended the support for standard ads. Advertisers can now transition to ETAs till 31st January, 2017 (instead of 26th October, 2016, as announced earlier.) This gives advertisers another 3 months to fully migrate to ETAs.

I suspect, the impression share for ETAs in your account will continue to be throttled till 31st January. Till that time, you want to ensure that all of your ad groups have an ETA (or multiple of them) which is performing at least as good as your current standard ads. Though, standard ads will continue to be displayed alongside ETAs for some time, the competitive pressure will force you to move over to ETAs completely at some point in future.

That brings us to this AdWords Script, which will help you easily track performance of ETAs compared to standard ads.   When you run this script, you will get one sheet with following processed data.

If you have used “Segment” feature in AdWords, this sheet is like having a “Segment by Standard Ads vs Expanded Ads” option at ad group level. For each ad group, you will see the cumulative performance of standard text ads and expanded text ads side by side. The columns are laid out to make it really easy for you to compare metrics (like CTR, Impressions, Conversions, etc.) for standard ads and expanded ads in an ad group.

The ad groups are sorted by total cost, in descending order. That is, performance of your highest spending ad groups will show up at the top. (Please note, STA – Standard Text Ads and ETA – Expanded Text Ads).

With this AdWords script, you will easily be able to do the following.

For example, if you want to highlight all the ad groups where CTR for expanded ads is less than CTR for standard ads, with a minimum 500 impressions for expanded ads, all you have to do is apply conditional formatting available in Google Sheets, where the results of this AdWords script are available.

The possibilities of the Expanded Text Ads script are limitless.

Then, there is a summary sheet, which visually tells you the account’s performance for expanded ads vis a vis standard ads. The key metrics for the account are summarized. Then, the metrics for standard ads are normalized to 100. Now, we find out where ETAs stand for each of the metric.

For example, here is a sample graph. The ETAs outperform standard ads significantly on all the important metrics. CTR for expanded ads is double that of standard ads.  CPC is about 20% higher, but a 40% higher conversion rate means, the cost per conversion is lower than the standard ads. 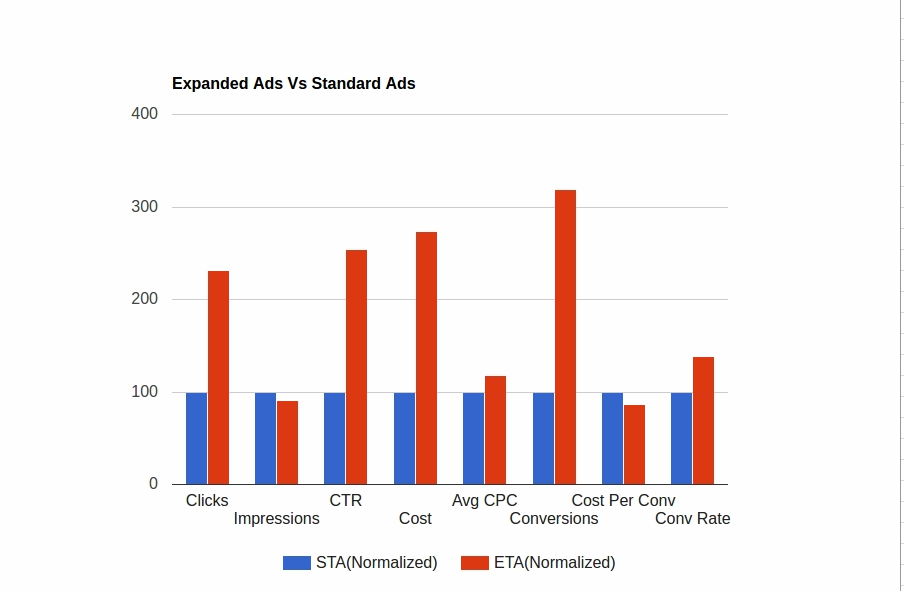 How to get the Expanded Text Ads script?

If you are in a hurry, just grab this script, change the spreadsheet URL and run the script.

Here are the variables that you can change to customize it to your requirement.

Take this script and see how your account is performing for expanded text ads.

Feel free to send an email (support AT karooya.com) if you have any queries for this script.

Get all the AdWords scripts published by Karooya