Creating and managing your PPC campaigns go hand-in-hand. With the former you make sure that all elements of your campaign are ready to perform, the latter is to ensure that the performance is sustained and enhanced.

Bing Ads automated rules is one easy way to stay on top of the PPC game, by setting up performance optimization rules. With this feature not only can you keep yourself informed of how your campaign is progressing but also make necessary alterations.

What are Automated Rules?

These are the rules that an advertisers sets to manage their campaign’s budgeting, delivery, bidding on a daily, weekly or real-time basis when a certain criterion has been reached.

The rule can be set at campaign, ad group, ad or keyword level. This feature allows more control over multiple levels which if done manually would lead to spending too much time scanning for details.

If you haven’t yet set an automated rule yet, then here are some of the rules that you can think of considering for your account

1. When a keyword hasn’t performed for 30 days

Keeping the benchmark of the CTR and impressions you can set a rule to be notified when any keyword has a CTR equal to or less than say 2% and Impressions greater than 100.

With this rule you are alerted when a keyword is poorly performing, so to speak, but still has untapped opportunity that could be achieved by either making changes in your ad messaging or increasing the bids for improved visibility on the search results.

Similarly you could run a scrutiny for keywords that have low CTR and low impressions. You can thereafter take the desired action of either removing the keyword, adding another keyword instead, bidding high for a performing keyword, m or simply pausing it for future action. 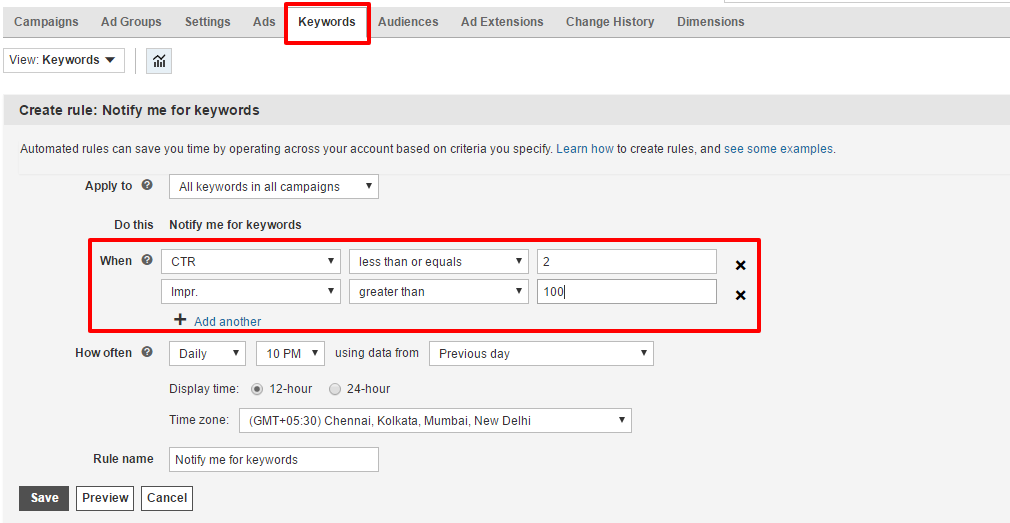 2. Ads not delivering any conversion

You might have created multiple variations of an ad to see which of those deliver best results. This could be done by setting the automated rule to see the week’s result of your ads. The one with lower CPA could be retained and the other paused or removed.

Similarly for your account with multiple campaigns and multiple ads, it might get a little difficult to track on a daily basis how each ad is performing. By, again using the similar rule you could get notified about the performing ads (driving clicks and acquisitions) and the non performing ones (having high CPA) 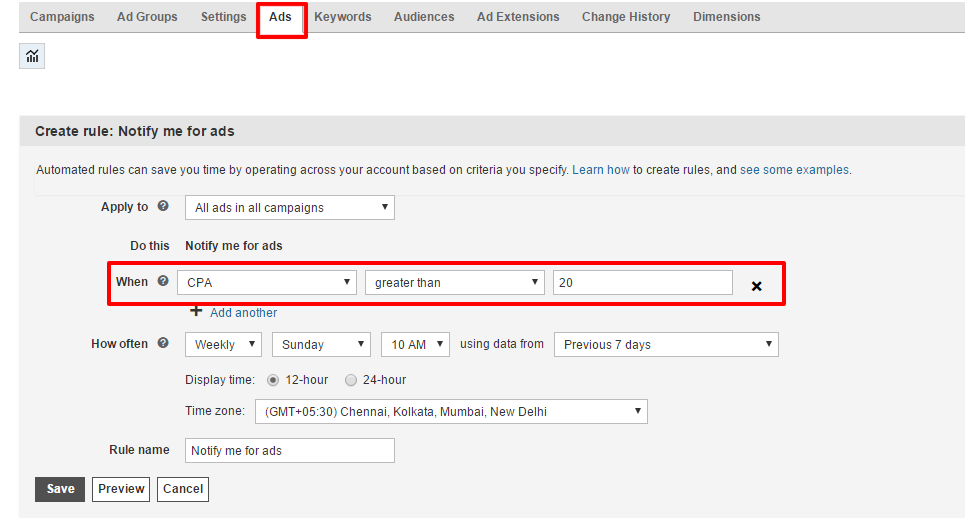 It might hamper your ads from performing if the keywords that you have bidded for are not competitive enough to push your ad on the first page of search results. To drive action from such keywords, you cans set up the rule at keyword level to increase the bids to the estimated first page bid estimate and further setting up a maximum bid you are comfortable with. 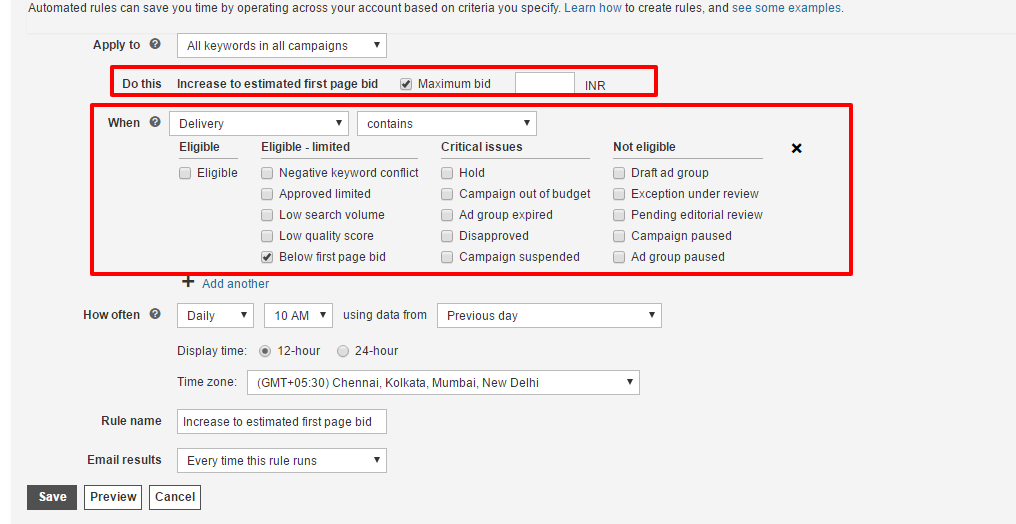 4. Get notified when the CPA of a keyword exceeds

You might want to be alerted when your CPA for a keyword exceeds your benchmark. So, if a keyword is costing you much for acquiring a lead, you might just want to push your bid down to control the high cost.

Similarly you wold want to be notified for keywords that don’t drive any conversion on a monthly basis but have satisfactory CTR to help further analyze whether the ad landing page could be modified to drive results or change the landing page altogether.

5. Increase campaign budget to continue your ads from performing

On a daily basis, you can assign this automated rule to increase you budget if the budget has breached the limit and when the CTR is higher and driving results. You would want to ensure that the day(s) when your campaign is performing the best, the budget doesn’t obstruct it from further delivering the ads.

Set at the campaign level, this rule makes you make the most out of peak day(s) or time of the day when your ad unexpectedly shows promising results. 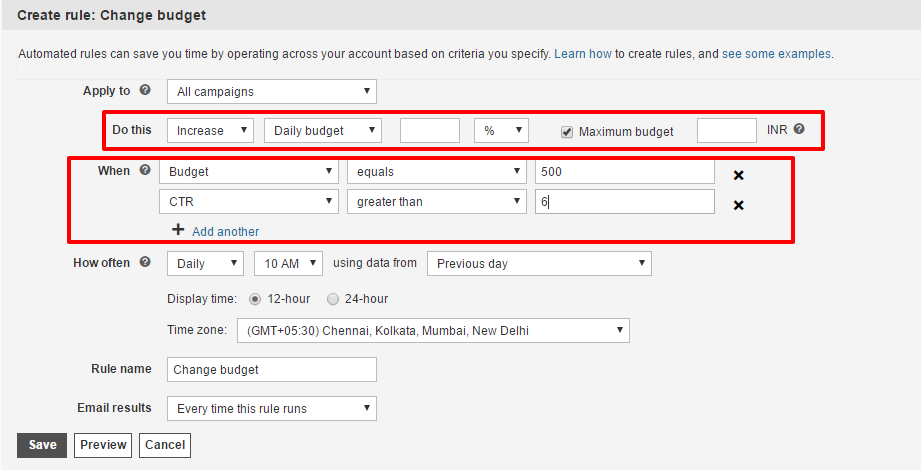 There are many other rules that you could create to stay on top of your PPC tasks such as enable a campaign to run on specific day or occasion, pausing alternate ad groups in a campaign when the budget is almost maxed out so that the top ad group can drive end-of-day results. Similar combinations of rules could help make your PPC management task a cakewalk, as far as the execution is concerned. Nevertheless, regular audit is still a must despite the rules being set, but you benefit massively by saving on time and reducing manual efforts.