Merkle released its Digital Marketing Report for Quarter 1, 2018 last month. We elaborate some of the key findings from the report in this post.

Q1 witnessed the a spike in the spending on Google Shopping Ads. Considered to be the highest growth observed since last 2 years, PLA’s beat text ads with a 40% YoY growth from 32% in Q4, 2017. The text ads only managed to grow to 4% from 15% growth in last quarter. This growth is attributed to the new ad variations such as the LIAs and Showcase shopping ads 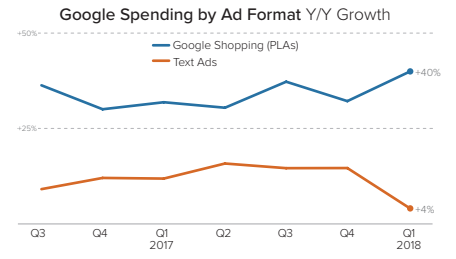 Where LIAs produced 15% of mobile google shopping clicks in this quarter, Showcase ads produced around 3% of the clicks. 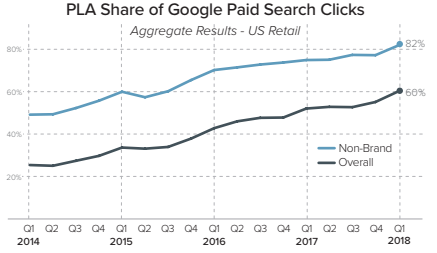 The overall ad spend of Yahoo an Bing Ads has grown by 35% in the first quarter of 2018. The growth of Bing Ads spend has been as a result of strong click growth of the Product Listing Ads. The PLA spend has increased to 64% in Q1, 2018 with spend on phone product ads growing nearly at 700%.

The clicks increase by 110% YoY in Q1, 2018 and Bing Product Ads share of retailers search ad clicks rose to 33%. The click share is also observed to have been the highest in the past 2 years.

The growth observed after the launch of desktop and tablet bids has decelerated at 20% in Q1, 2018, followed with decline in phone spending growth at 33%.

Alternately the combined phone and table paid search click share was  over 60% in Q1, 2018, the highest ever witnessed. Of this phones click share was 51% whereas that of tablet was 9%. The combined spend has started rising again and hit 39%, after the dip due to the launch of desktop and tablet bids. 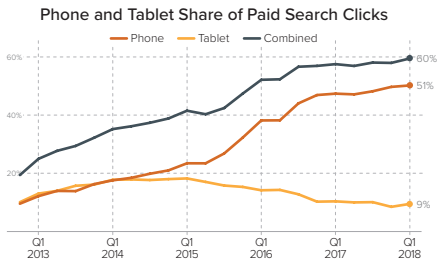 For more insight, here is the link to the full report again.