[Update on 29th Feb: There is an important update at the end of this post. ]

While Google has been testing 4 ads on top of the desktop search result page and no side ads, these tests were just that. Tests. Last weekend, Moz found that Google has moved to 4 top ads format.  The same was confirmed by Google to Search Engine Land. 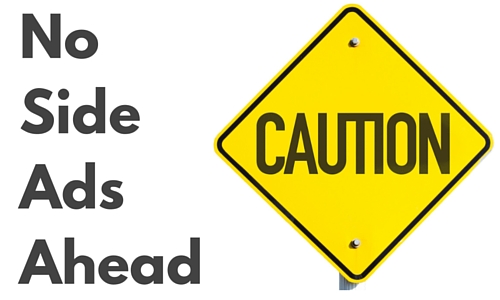 Aaron Levy of EliteSEM published an extremely well-researched post on the impact of this change.  Matt Umbro of Hanapin Marketing also weighed in with data from 3 different accounts on potential impact of this change.  These two posts have covered the topic in detail. If you are not fully aware of the issue, you may read those two articles before you proceed here. Really!

Now, that you have received all the gyaan from the masters, here’s an AdWords Script to help you quickly identify the keywords that may be under threat of losing substantial amount of valuable traffic. You can get this data by using the “Top Vs Other” segment  report in AdWords, but it is not intuitive.

Let’s start with the final result you will see with this script.  This script will give you a sheet which shows the keywords with highest number of clicks from Side positions. (Here, I’m using the term “Side Position”, but technically, it includes ad shown on side positions as well as the bottom of the search result page ads.) The results are sorted by number of clicks on the side position.

With this report in hand, you will be able to identify keywords that may lose most clicks, click share and conversions.  You may decide to raise bids on keywords that are valuable to you.  If you are part of an agency, you can send a quick heads up to your clients about potential loss of traffic from AdWords.

If you are in a hurry or you have working knowledge of AdWords scripts, here’s the script to identify keywords impacted by zero side ads. Have fun with the script.

Rest of you who have stayed back to know a bit more about the script, here’s how you can customize it to get it working for you.

That’s it. Here’s the script to identify keywords impacted by zero side ads.  Once you run the script, it will give you the actionable data within seconds.

If you have any questions or feedback about the script, please leave a comment or send an email to shashi AT karooya.com.

[Important Update on 29th Feb] We have published another script that will find the true impact of this change. Go ahead and grab that script as well.

Get all the AdWords scripts published by Karooya