This year, Bing Ads introduced a series of updates and features that aimed towards improving how advertisers connect with their customers. Let recap some of these changes introduced and how they will impact advertisers in year 2017.

Adding on to the many ad extensions already available, Bing Ads introduced Structured Snippet extension to highlight specific aspects of advertiser’s products or services. A few months before they announced two more extensions to enhance the ads and its performance. These extensions were Callout and Review extensions. With these extensions added in their kitty Bing Ads have matched up with AdWords. Here is a post on AdWords vs Bing Ads Ad Extensions that you might want to also have a look at.

With these new extensions advertisers can upgrade the messaging and put unique product feaures for display.

Further on, they made a couple of announcements surrounding Expanded Text Ads. Since Google announced the prospect of launching an extended ad version during the Google Performance Summit, Bing Ads realized the need to stay compatible and announced their plan to support ETAs too.

There came a series of ETA related updates, where firstly pilot access was given to all Bing Ads users and later made worldwide available.

On the other note, they announced expanding their device targeting by giving advertisers more control over adjusting their bids by device. It added ‘Desktop’ as a new device option and gave expanded bidding ranges. Post its pilot stage it was formally made live in the month of November.

Expanded Text Ads is being looked upon as the ‘next big thing’. With Bing Ads having made their platform compatible to this new format, the next year will hold a lot of opportunities in terms of better ad messaging and more more competition to fight for the top rank.

In September Bing announced period comparison, where advertisers could compare their campaign’s performance between two time periods. This feature, helps advertisers make some strategic decision such as which ad group to invest money in, how has your campaign performance evolved, have you been spending more or less etc.

This feature will help bring out some key learnings or mistakes done in the past and ensure the learnings are adopted and mistakes avvoided.

The following month they released Shared Budget for advertisers. This feature is intended to automate the process of distributing un-utilized budget across all campaigns, hence saving time manually making these changes and making budget management easier.

A few months earlier Bing Ads made Enhanced CPC available, already present in AdWords. This is a bidding strategy that maximizes conversion by adjusting your bids and improving your CPA.

Bing Ads introduced new tracking parameters to help identify where the users were coming from. The three new tags that could be inserted in your landing page URL were {campaign}, {ad group} and {network}. Here is what these tags aim to do: 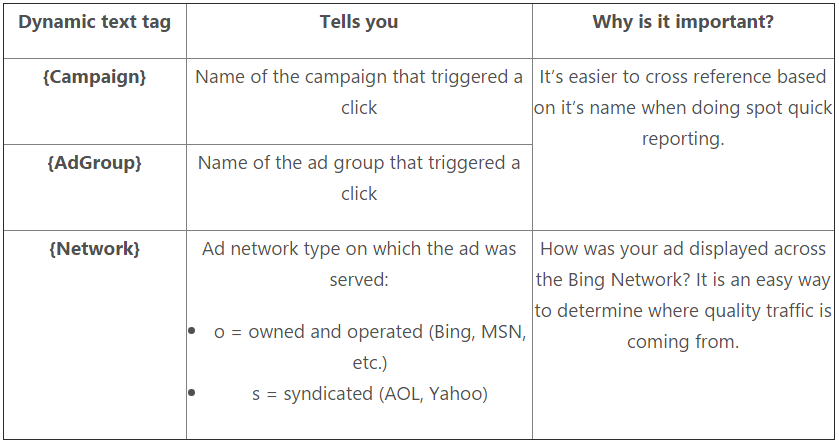 To make it a step easier, Bing Ads introduced Upgraded URLs a couple of months later to help advertisers make updates to their tracking code. So, basically your final URL, tracking template and custom parameters were added as separate fields. The main benefit of this update was the ease in managing your tracking information without it being sent for review, hence saving on a lot of time. Improving the tracking technique will further ensure better assessment of your campaign led conversions.

With the year coming to a closure, Bing Ads sure has come out as a winner with transformations that makes it an approachable platform.

More roundups for this year coming your way, so stay tuned with our blog.